G2A.COM, the guys who have been providing you with (among other things) a marketplace for buying and selling video games and other digital goodies at great prices, are spreading their wings and entering a new side of the video game industry: game development. Blunt Force, G2A’s first full-length video game, will thrust you right into the battles and turmoil of World War II. 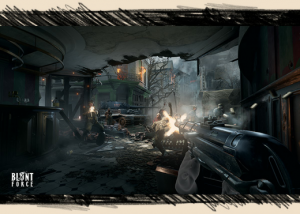 The game will be chockful of adventure, brimming with a rich history and enhanced gameplay. The script for Blunt Force will further elevate the game as it will be written by none other than Hollywood screenwriter Mark Bristol, who has worked on countless feature films including Mission Impossible, Edge of Tomorrow, and Maleficent. This cooperation will transform Blunt Force from your average point-and-shoot VR into
a compelling and emotion-packed adventure.

Blunt Force will house two simultaneous storylines, the first of which takes place before the war, and will be full of hidden clues and secret information for the player to track down. The second takes place during the war and will be the main shooter mode, split into arcade and challenge. The goal of the arcade mode will be to gun down as many opponents as possible and will feature simplified shooting mechanics, allowing all (even newbies to VR), to fully experience the game. The second shooter mode – the challenge mode – will be more complex and will feature fewer, more difficult to hit targets and a plethora of different weapon mechanics to explore, including manually reloading various weapons and setting off hand-grenades

Blunt Force will offer an extremely immersive VR experience for both beginner and experienced VR players. The game has already been in development for a few months, and will be released in episodes starting in 2017. Keep an eye out for more details, coming at you soon straight from G2A’s own development studio.